Diving into Blue Planet's High Levels of Catch Up Viewing 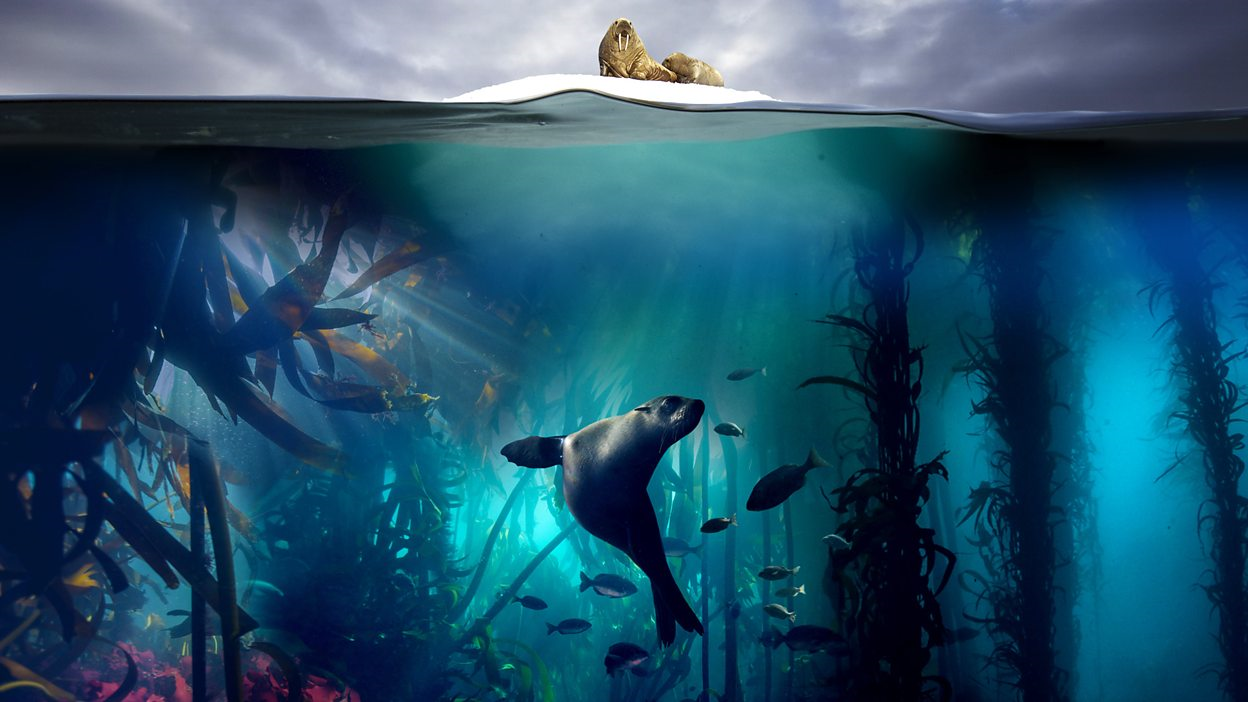 David Attenborough and co are back for another awe-inspiring insight into the natural wonders of our planet this autumn in the shape of Blue Planet 2. The series dives into new depths and uncovers phenomenal new worlds – it truly is the Ocean as you have never seen it before.

Whilst breaking boundaries in broadcast and exploration, it is also breaking records in ratings. Consolidated viewing figures made the premiere episode the most watched TV programme of the year to date, and the most viewed since last year’s Great British Bake Off finale.

Incredibly, it is also the second most viewed programme of all time when it comes to recorded or on demand viewing via the TV set. 3.6 million people viewed the programme in the 7 days following the broadcast. Only the 2015 Christmas day broadcast of the Downton Abbey finale was viewed by more.

With such high levels of time shift viewing, we have investigated to what extent a programme such as Blue Planet 2 serves as competition for viewing not only during its slot but in the following hours and days.

The first day after broadcast is traditionally when a programme achieves it’s highest levels of time shifted viewing and episode 1 of Blue Planet 2 was no exception, with 1.25m people watching on the Monday.

There were a relatively steady and significant number of people viewing the episode throughout the day, with viewing peaking between 7 and 9 in the evening. Interestingly, the programme achieved its highest levels of viewing during the slot in which it was originally broadcast. 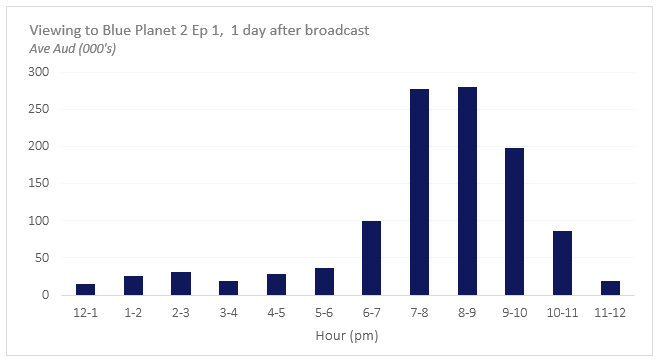 If we were to define recorded viewing to Blue Planet 2 as a channel in its own right, on the Monday Evening between 8 and 9 pm it would rank higher than ITV2, E4 and BBC 4 in terms of average levels of viewing, effectively placing ‘Channel Blue Planet’ as the 9th biggest channel in the daypart across total TV. 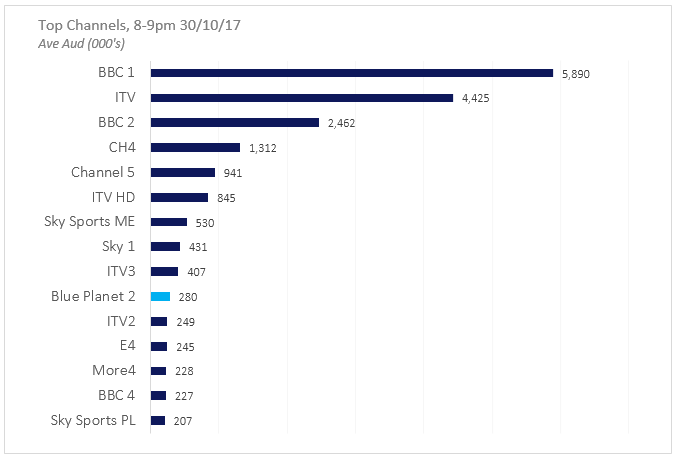 Considering Blue Planet 2 is such a popular programme with younger audiences, this emphasises the extent to which the programme is a key competitor for younger viewers not only in its slot, but also in the days that follow. Over 900k viewers aged 16-34 watched episode 1 in the 7 days following broadcast, that is 26% of all viewers tuning in on catch up.

Throughout the week the programme continued to draw in high volumes of recorded and on demand viewing. Viewing levels dropped off significantly from Monday to Tuesday, but maintained a steady and significant level for the remainder of the week.

In each case from Monday to Friday, viewing peaked between 8 and 9 pm –  the time slot in which it was originally broadcast. With Attenborough content historically and traditionally airing in the 8-9 pm slot, is this when we now expect to, and as a result instinctively want to watch this type of content? Or are there simply more of us in front of our TV sets? 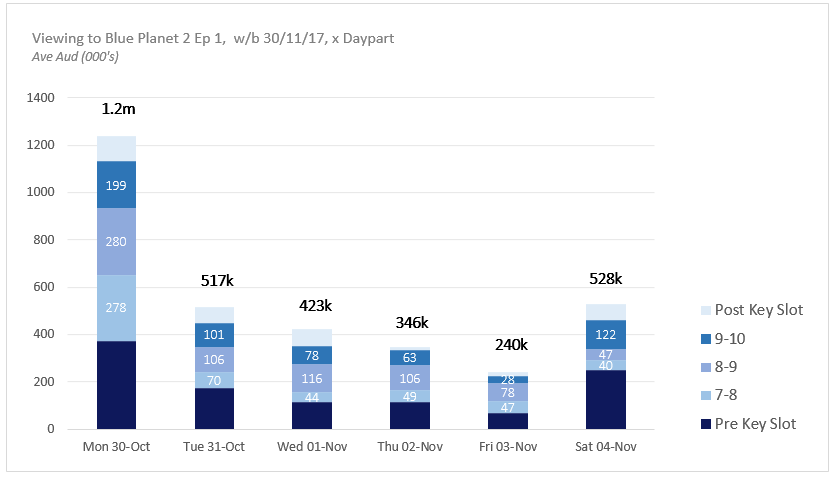 On Saturday the 4th November, six days after broadcast, the episode experienced a surprisingly high level of uplift to total catch up viewing. Naturally we expect to see viewing levels to programming dwindle as each day passes but Blue Planet 2 experienced a remarkable resurgence in viewing levels on the Saturday.

In total 528k people viewed the programme across the day, which is only marginally fewer than the 551k of those who caught up on Friday night’s episode of Eastenders. In fact it was viewed by more people on Saturday than a series of popular programmes from the previous night, including The Graham Norton Show on BBC 1 and Coronation St and Emmerdale on ITV.

There were steady levels of viewing to the programme throughout the day. However, in contrast to the previous days, viewing peaked during the 9-10pm slot rather than the usual 8-9pm. This may well be caused by strong competition on live TV from the likes of Strictly Come Dancing, which aired from 18:50-20:20, and was watched live by more than 8 million people. Comparatively, new drama Gunpowder did not draw in huge levels of live viewing between 9 and 10pm on BBC 1, which may have provided opportunity for viewers to explore other options.

Examining exactly when viewers tune in to recorded content can provide valuable insight into the ways in which people choose to view certain types of content. Blue Planet 2 is a remarkable case in which levels of recorded viewing remained consistently high in the seven days following the Sunday night broadcast. Interestingly, we seem to have been hard-wired to want to view this show during its traditional slot. Between 8 and 9 pm appears to be the time of day with which many of us associate with this content, and naturally choose to watch it.

Furthermore, the sheer size of the programmes audience serves as a reminder that as viewing recorded and on demand content continues to become a more intrinsic and accessible part of the modern day viewing experience, programmes such as Blue Planet 2 are a constant competitors, drawing a significant share of viewing away from more traditional and linear forms of TV.

With over 3 million viewers tuning into episode 2 on catch up last week, this trend looks set to continue.