The Box Set is Dead, Long Live the Box Set 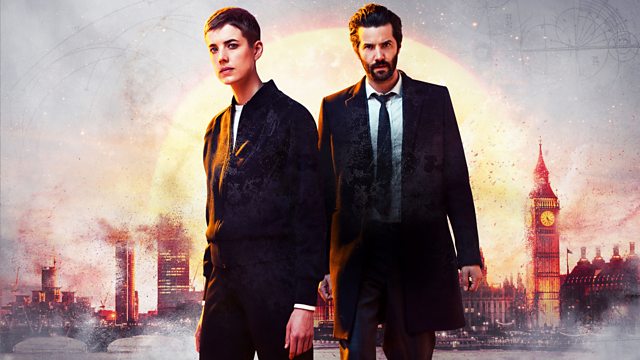 Unless you have spent the last 4 years in the media wilderness, you will be aware of the rise of subscription-based on demand video platforms such as Amazon Video, Now TV and, most prominently, Netflix; who release full series or ‘Box Sets’ of original TV shows instantly onto their platforms. Netflix in particular requires us to do very little in order to spend hours on end watching our favourite shows, only to seemingly mock us by asking if we are “still watching”; as if in disbelief at how well the system works. It is true, the system does work and the rise of these subscription services has made them a key competitor to broadcasters and a major threat to the traditional physical box set and DVD formats in recent years.

However, rather than dwelling on the challenge facing broadcasters in the wake of these developments in the industry, we could instead ask what broadcasters can learn from the increasing success of these subscription-based services in the context of their on demand strategy.

In a significant step towards the implementation of Dovetail data in March of this year, BARB have released records of viewing to non-linear content on the BBC iPlayer; allowing us to analyse trends in viewing to content exclusive to the BBC’s on demand offering, albeit without the granular data that Dovetail will provide. However, we are able to see patterns in levels of viewing to the service that can tell us a great deal about the ways in which people consume on demand TV, and what in particular draws in large volumes of viewing to the platform.

On the 16th December 2017 the BBC released a series of full Box Sets onto the iPlayer platform free for people to binge view over the festive period. As a result, we have observed a dramatic increase in levels of viewing to non-linear content on iPlayer through a TV set from the 16th onwards. 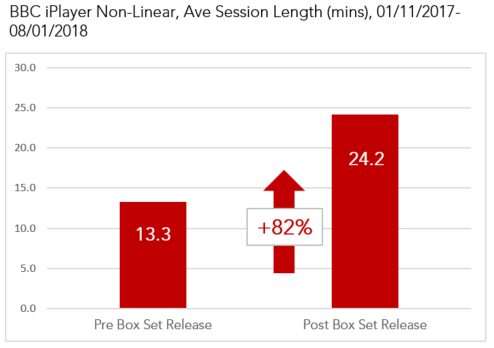 The most recent Box Set to be released was the pre-apocalyptic crime drama Hard Sun, the full series was released on iPlayer following the airing of Episode 1 on BBC 1 on Saturday 6th Jan.  This is one of the first brand new BBC series to be released onto iPlayer in its entirety, in a ‘Box Set’ or ‘Netflix Style’. The programme will receive similar treatment in the US as it has been co-produced by US streaming service Hulu, who will be broadcasting the programme on the other side of the Atlantic in March. 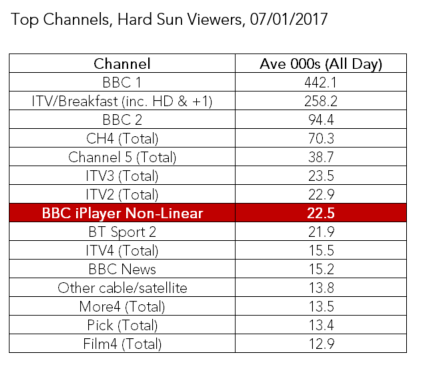 Furthermore, there is evidence to suggest that the release of this particular box set increased the level of Netflix style binge watching on the iPlayer. On average. the Hard Sun viewers spent over 2 hours viewing non-linear iPlayer content on the Sunday, 43 minutes more than the average time spent on the day across all viewers. 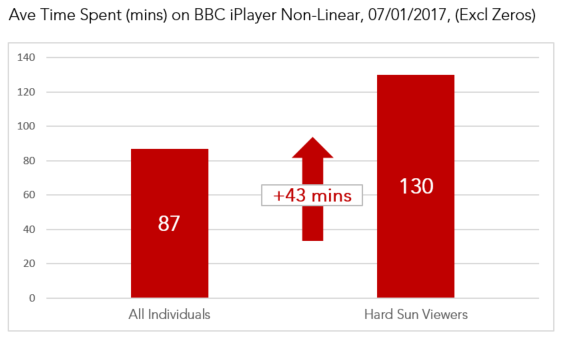 So what can this tell broadcasters about the implications of releasing content onto their on demand platforms in a box set style format? For one, there is evidence that in this particular case study, traffic to the on demand platform was significantly increased as people were encouraged to binge view the remainder of a series on iPlayer. It is a strategy that could well have some genuine benefits to broadcasters as it increases the level of engagement viewers have with their programmes and their on demand platforms. Time will tell to whether or not this causes any cannibalisation effect on future traditional linear broadcasts of a programme, which could well be a potential downside to the box set style approach. We will be keeping a close eye on the remainder of Hard Sun on BBC 1 to see what effect, if any, this preemptive release will have on live and catch up audience levels.

Nonetheless, what is clear is that as big subscription services like Netflix change the ways in which we consume content, broadcasters need to fully understand the challenges and opportunities these shifts in viewing behaviour create. With Project Dovetail on the horizon, BARB data will surely have a significant part to play.

BBC iPlayer Non-linear: Viewing to BBC iPlayer through a TV set for content not broadcast on linear channels. Only includes content submitted by BBC.

To receive email updates for any new blog posts, scroll to the bottom of the home page to subscribe and stay informed.