An evaluation of long-term trends in women’s sports viewing

Even in a rapidly changing modern society gender stereotypes remain prevalent. We may be becoming more aware than ever of what is or is not appropriate and what’s considered sexist, we also might be more careful when directly addressing controversial subjects and we might be in a productive dialog about gender equality, but there still are numerous areas that are too conservative in their nature or too complicated in their structure to adjust quickly and efficiently.

One such area is sport. Despite a gradual and substantial rise in female participation in sport in the UK over the last few decades, the battle for equal opportunities and equal pay or prize money is ongoing. The latest development has come this week, in which Manchester United have formally submitted an application for a professional women’s football team. What is clear is that we are seeing the beginnings of a concerted effort to increase women’s participation in sport, but there is undoubtedly a long way to go.

But what does that mean for the media? Is it time to start fighting harder for broadcasting rights to women’s sport and is there headroom for attracting better viewing from female audiences?

Sport content (defined by BARB genre) on these channels on average reaches out to about 70-80% of both men and women a month (Fig.1). The percentage of male coverage is usually higher, however in absolute numbers there are more ladies tuning in. However, despite the parity in coverage the genre as a whole is considered more male oriented and is believed to  predominantly serve men aged 16-54. 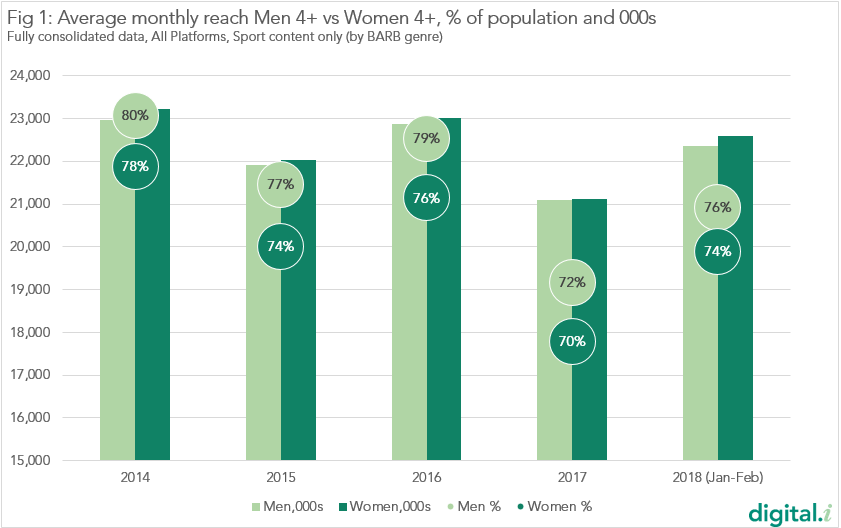 This is because men show much higher interest and deeper engagement with sports content and it shows in the data. An average male viewer spends about 14 hours a month watching various sports, whereas for an average female viewer the figure is 45% lower (just over 7.5 hours a month). We observe the same picture when it comes to average frequency of viewing a month: 17.7 TX’s for men vs 9.8 for women; both these factors contribute to the fact that the average levels of female viewing is noticeably below that of male viewing (Fig.2).

However, importantly the trends observed in these graphs show a shift towards women’s contribution to sport viewing. Average viewing from both men and women has been gradually decreasing over the last 4 years, but it’s clear that male viewing has been declining at a faster rate; suggesting an increase in the importance of the female audience. Year on year comparison proves this point, women’s share in the viewing profile is growing with Olympic and World Cup years causing significant spikes in viewing (Fig.3). 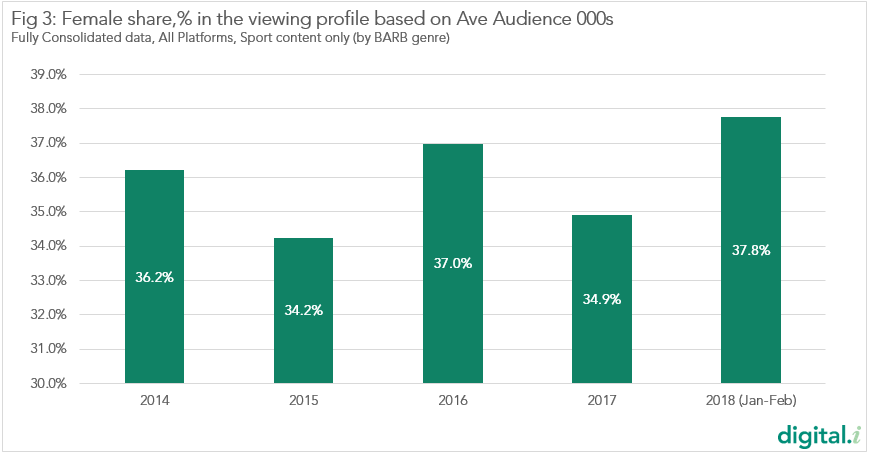 If sports TV is a destination for male viewers on a regular, or even daily basis, it serves a different needstate for women.  Female viewers tend to tune in more occasionally and viewing is usually dependent on the content. Female viewing spikes when there are some major competitions, especially international ones, bearing this in mind it’s not particularly surprising to see that major terrestrials attract better viewing from ladies than dedicated sports channels on Sky and BT (Fig. 4).

Eurosport is a particularly interesting case study, because it has been consistently increasing women’s contribution to viewing on the channel YoY, and in 2018 to date it has also increased its overall viewing by attracting more female viewers (Fig. 5).  Moreover, the Eurosport portfolio shows the highest average percentage of solo-viewing by women (47%) over the observed period with a particularly high share in Jan-Feb 2018 (51%). These trends this year have again been driven by content; the Australian Open tennis and the Winter Olympics have both featured on Eurosport this year and are two major sporting events popular with female viewers. 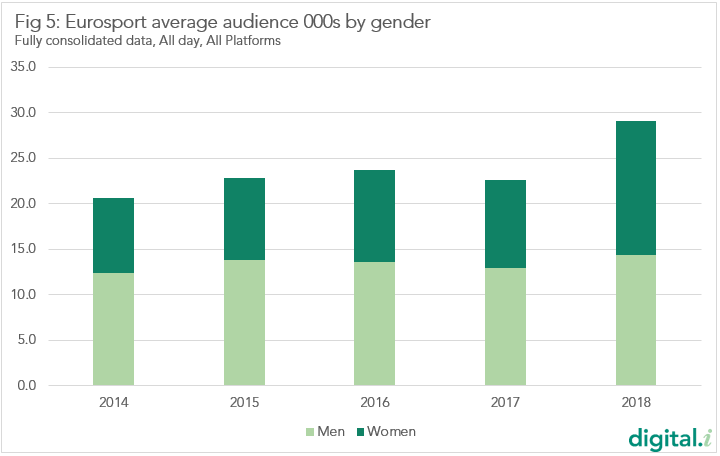 Another possible explanation for Eurosport’s relative success with female viewers is that Eurosport channels are available to viewers of subscription based TV platforms at a relatively low cost. For example on Sky, Eurosport is provided as part of the same package as entertainment channels such as Sky Atlantic, Sky Living, SyFy and Dave, viewers are required to spend considerably more to access Sky Sports Channels. It is then arguable that this additional pay wall separates the sports viewers from the sports super fans, whom we know are predominantly male viewers at present. This highlights an important strategic question for content providers who offer costly sports subscription packages, is it worth “searching for a woman” and if so would simply adding more female oriented content diminish its appeal to those male viewers who invest so heavily in sports content?

There is clearly a lot of potential in targeting women with sports content right here right now, and trends suggest that the importance of female spots viewing will only increase in the long term. The main drop off point for female viewing comes during their teenage years, before that the difference in share between boys and girls is minimal. While boys grow even stronger affection to sports by trying to look, act and become more like top-athletes as they grow, the majority of young girls are still finding their role models in pop-culture. It will take time and investment to change this imbalance, many areas including: payroll balance, sponsorship for athletes, increased professionalisation, marketing, broadcast time and training opportunities will all have to be addressed; however, we believe that in the end it will be beneficial for everyone involved, including broadcasters and advertisers.

If you are interested in this subject, we would be happy to discuss, hear your thoughts and share ours. Check out our earlier blog post on the sports rights here: https://www.digital-i.com/blog/sports-rights/

We can also provide you with more extensive BARB data and in-depth analysis of female sports viewing tailored specifically for your business needs. Just drop us an email on info@www.digital-i.com or contact the office by the phone.

Stay in touch by subscribing to our blog here: