Insights / News and Opinion / Netflix starts September with a bang

Netflix starts September with a bang

September was a big month for SVOD.

And a bigger one for Netflix.

After months without a big hit, Netflix Originals hit Europe with a bang in September. Three key titles stood out from the rest, all of them reaching over 17 million Netflix accounts across UKFIGS.

Can you guess what they were?

Outside of Netflix HQ:

Despite some excellent performances across the board in September, it looks like Netflix won the match in Europe. Read on to find out how they did it.

NETFLIX IN SEPTEMBER: THE TITLES THAT WON THE GAME

Netflix all-star Money Heist passes the ball to Sex Education, who takes it and runs the length of the field, confidently sprinting past defenders finally crossing to player 456, the newcomer. Suddenly, after initially looking nervous, player 456 dodges Cinderella, nutmegs Cruella and shoots….. GOAAAAAAALLLLL. Squid Game repped player 456 scores a global goal winning the September match for Netflix along with the hearts of the crowd.

Returning seasons of big shows almost always see an immediate spike in viewing. We can see this with Sex Education and Money Heist. A new season launch attracts staunch fans to come and see the next installment of the story. They also serve to encourage rewatching of previous series. In some cases, they even widen reach to viewers who’ve not previously seen the first series. By tempting them to binge through the first two seasons, all the while knowing that the third instalment is ready and available, this technique works to keep the content-hungry happy.

In contrast, new titles don’t become household names over night. The success builds slowly. While Netflix has short trailers that are occasionally released on YouTube and accessible on the platform itself, their promo model varies significantly in comparison to linear TV. Rather than add short clips in between our viewing, Netflix moves content up and down its user interface, into lists, onto a featured banner, ensuring that while we don’t have our viewing interrupted; every time we enter the platform we become more familiar with the new titles.

Let’s look at the activity for Money Heist, Sex Education and Squid Game. The two returning series had an initial viewing spike on their first day, with it quickly tapering off. Whereas Squid Game had a slow but consistent rise, which undoubtedly continued into early October.

Viewing for these titles also had some significant variation in each country. For France and Spain, Money Heist was the most popular, followed by Sex Education and then Squid Game trailing. In Germany, there was little difference between the 3 indicating the huge popularity Squid Game must’ve achieved in its first month.

Sex Education and Squid Game were followed by Clickbait and Kate In the UK, with Money Heist closely behind.

In France, Lucifer and Kate were not too far behind the big three (Sex Education, Squid Game & Money Heist), but in Italy, Lucifer actually outperformed Squid Game, along with Money Heist, although, as mentioned before, it looks like Squid Game’s fifteen minutes of fame is not yet over…

What may have gone under the radar is that September was also a good month for Prime Video. The relative successes of Nine Perfect Strangers and Cinderella were dwarfed by the hype surrounding Squid Game and the aforementioned new season releases.

Interestingly, NPS initially launched in August, but the staggered release strategy kept the show in the top rankings for two months in a row. The short lifecycle of full series drops is a problem for streaming platforms, because it encourages seasonal churn. Sure, a new global hit might increase subscriptions and engagement temporarily, but how do you keep the those eyeballs on your platform? Prime Video’s answer to the question is: staggered series releases. 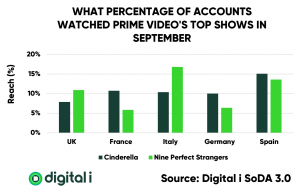 All in all, September was an extremely successful month for streaming services, especially Netflix. Big original hits are always sure to bring in the viewers. The true challenge lies in keeping a subscriber interested once the big hits are old news.

If you’re interested in understanding more about release strategies and how they impact SVOD content ratings, get in touch or book a demo of our award-winning SVOD viewership analytics platform, SoDA.